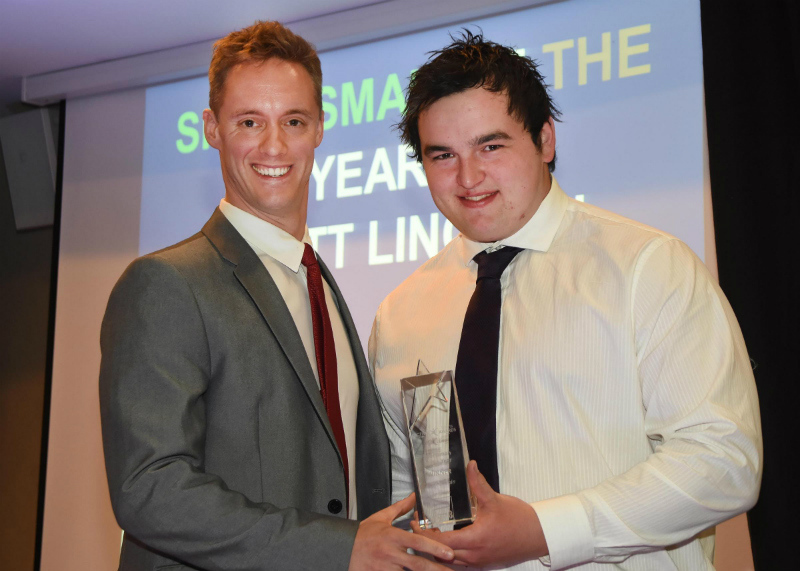 Sport in the city of York is thriving, with a multitude of clubs and facilities offering people of all abilities and ages the opportunity to get involved in sports of every kind – from rowing and rugby to futsal and fencing.

Sport in the city of York is thriving, with a multitude of clubs and facilities offering people of all abilities and ages the opportunity to get involved in sports of every kind – from rowing and rugby to futsal and fencing.

As an active member of the York community, Preston Baker is a keen supporter of the city’s community sports providers and their budding stars. One way we show this support is by sponsoring the Sportsman of the Year Award at the Active York Sports Awards – which we've done since they launched three years ago.

On 17 March, our own James Baker was honoured to present the 2016 title to local shot put ace Scott Lincoln – for the second year running. Scott, who is one of York’s sporting success stories, retained the award thanks to an outstanding 2015 season which saw him crowned British Champion.

Scott trains with the popular City of York Athletic Club, which offers friendly, high-quality coaching for children aged from five years up to veterans of any vintage.

Organised by Active York, the city’s sport and active leisure partnership, the annual Active York Sports Awards celebrate the achievements of athletes, coaches and volunteers across the broad range of sports represented in the city. In 2016, the glitzy ceremony at the University of York was hosted by BBC sports presenter Tanya Arnold, with awards going to individuals from clubs including York City Rowing Club, York Disability Tennis Network, Clifton Cycling Club and University of York Futsal Club.

“It was a really uplifting evening. Scott is a shining light in the York sporting community and an inspiration to many other sporting hopefuls across the city. It’s great to see a product of one of our leading clubs doing so well on the national stage. Who knows where his talent will take him next? We can’t wait to follow his progress.”

“It’s always great to receive awards such as these. The awards night wouldn't be possible without York businesses such as Preston Baker helping out by sponsoring the event. The City of York has been as massive part of my success throughout my career.The Athletics club has provided me with my coach, Paul Wilson, who continues to put in as much hard work as the athletes to get the maximum potential out of us. I’m currently in training after my most successful indoor season to date, aiming high and hoping to book my place on the GB squad for at least one of the Majors this year. My coach and I are excited to see what we can produce after a great indoor season and winter training.”

Everyone at Preston Baker will be following Scott’s progress with great interest. We wish him every success for the future.